Take me out to the ballpark! The new spring training stadium for the Atlanta Braves is scheduled to open on March 24, 2019. At a cost of $125 million, this facility will provide a great economic boom for the Venice, Fl and North Port, Fl market areas. How awesome for Venice and North Port residents to be able to attend spring training games in their own backyard.

Big Jim Self Storage welcomes the Atlanta Braves to the area. We have four locations very close to the stadium to serve you:

Following is an informative Business Observer article written by Grier Ferguson about the new stadium. 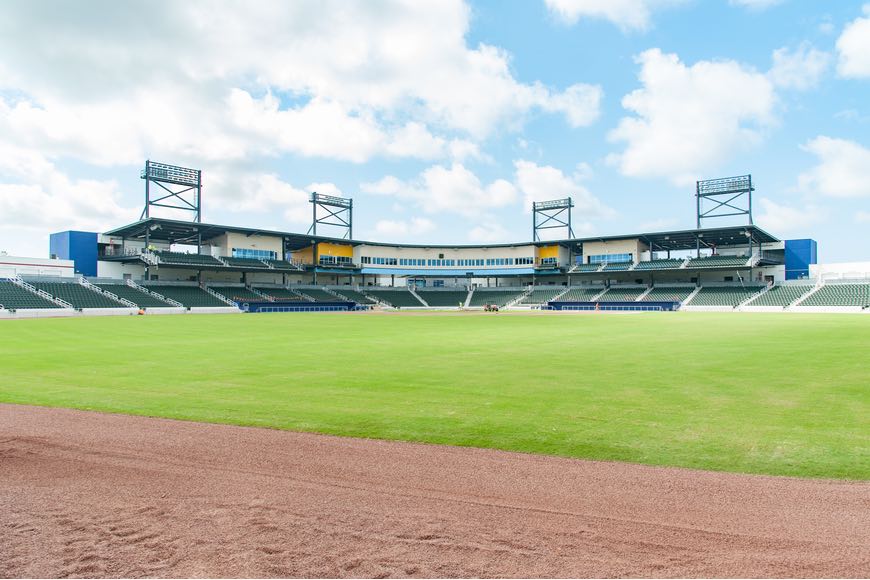 The seats are installed at CoolToday Park, and on March 24 thousands of fans will come streaming in for the first game at the Atlanta Braves’ new spring training home.

That game will mark the Major League Baseball team’s official move from the ESPN Wide World of Sports Complex in Orlando to West Villages, a master-planned community in North Port in south Sarasota County. The project, on the site of a former cow pasture, also marks the first new baseball complex in the region since JetBlue Park was built in 2012 for the Boston Red Sox in Fort Myers.

With just a handful of weeks left, the construction team behind the $125 million project is wrapping up elements from handrails to sidewalks to food service. Or, as Fawley Bryant Architecture Project Manager Kirk Bauer puts it, “We’re rounding third and sprinting home.”

In the final phase, Bauer says a lot of critical elements will get completed for the project, which broke ground in October 2017. “If anything, we’re just working longer days and pulling in a couple extra staff members,” he says.

The team behind the project also includes Sarasota-based Tandem Construction and Michigan-based Barton Malow. “They’ve been working their tails off,” Bauer says, including long days, long nights and weekends. “Everybody’s rising up to the occasion to get it done.”

Braves Vice President of Florida Operations Mike Dunn points to the timeframe as well for the core challenge. “We’re here before the sun comes up, and we don’t leave until the sun goes down, seven days a week,” he says.

Tandem Construction Senior Vice President Brian Leaver says having enough manpower to complete the work is key. “The local subcontractor community has been unbelievably successful in getting us where we are,” he says. “Everybody wants to be part of it and sit back in a month from now and enjoy the hard work by watching a baseball game.”

The types of workers have shifted from the structural and building envelope side to finish trades, but the quantity of workers hasn’t let up. “We’re still averaging several hundreds workers every day,” Leaver says.

In these latter stages of construction, Bauer has focused on immediate responses to workers’ needs in the field. That means clarifying any questions that come up from subcontractors, such as whether a light is installed in the right spot. “Taking the guesswork out of it is really one of the things I’ve been doing a lot lately,” Bauer says.

Now, installation of handrails and guardrails is taking place, along with furniture, signage and graphics. “Our branding incorporates certainly our team colors, pays homage to some of our legends and then it activates our current branding — not only the name of the facility but that it’s the new spring training home of the Atlanta Braves,” says Dunn.

Inside the stadium, workers are finishing a feature ceiling made of simulated maple wood that calls to mind wood used for baseball bats. In addition to being visually appealing, the ceiling also conceals pipes and other elements of the construction.

Another key aspect of the project the team is finalizing is food service. That includes installing equipment, passing health department inspections and more. “The ballpark will be pretty, but if you can’t buy a hot dog, that’s a problem,” Bauer says. “It has to function.”

The punch list process is beginning, too. That involves project leaders identifying elements to be fixed or touched up, like a paint chip or something that hasn’t been installed correctly. Bauer says, “We’re down to the final tweaks in a lot of places.”

He says they’re aiming to get temporary certificates of occupancy earlier so the Braves can start moving in furniture. “We’re pushing to try to beat the dates to help the Braves get moved in and get operationally sound so they can be successful on the 24th,” Bauer says.

What’s been most rewarding about the project, Leaver says, is seeing the effort everyone puts into it. “Whether it’s a guy who’s just here to do general cleanup or an executive from the Braves, everybody’s got a common goal and we’re going to meet that goal,” he says.

At the first game in the new stadium, there will be a big Braves leadership presence, says Dunn, plus a ribbon-cutting ceremony and an inaugural pre-game ceremony.

“We’re going to be working up until the swing of the bat, if you will, just to make sure it’s perfect,” Bauer says. “This is going to be the best spring training complex in Florida.”