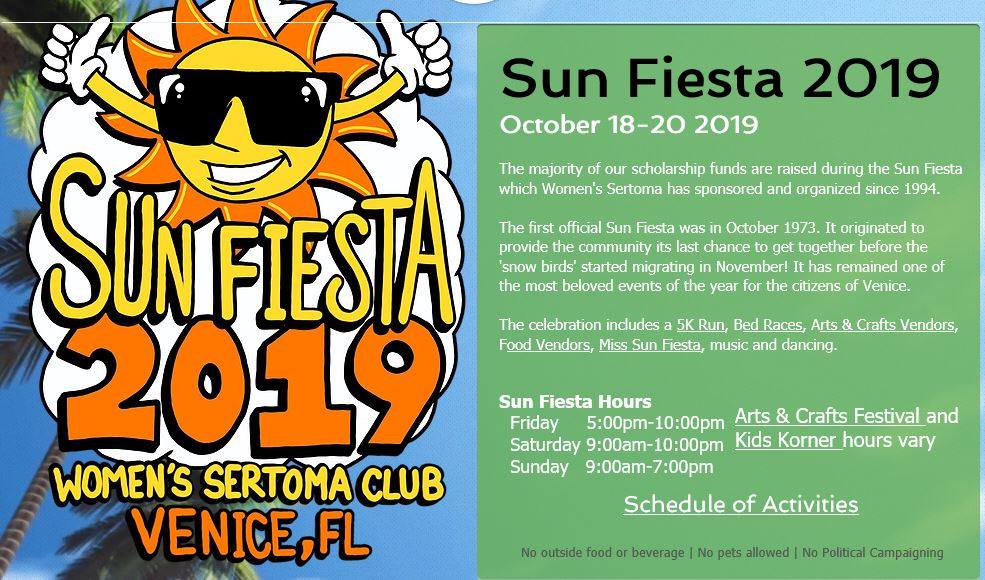 The Sun Fiesta is the longest-running community event in Venice, FL. Organized and produced by the Women's Sertoma Club of Venice, this fun-filled event features live music and other entertaining activities, all benefiting local causes. The Sun Fiesta brings Venice residents together and enhances the sense of community and fellowship in the area. Big Jim Self Storage is proud to be a part of the Venice, FL community. We offer the best Storage Units in Venice, FL and have three convenient locations: 997 Center Rd, 5005 Englewood Rd & 3000 S Tamiami Tr to serve area residents. The following article from the Sarasota Herald-Tribune describes this fun event.

VENICE — When the first Venice Sun Fiesta was held in 1973, it was a chance to get together before the snowbirds flocked to town.

But now, organizers say, the island’s longest-running event has not only hastened some snowbird’s annual southerly migration but given some a permanent place to roost.

“I was walking around 16 years ago and realized that everyone had a smile on their face, so I thought this is something I have to look into,” said Mary Littel, who moved from Mystic, Connecticut, in 2003. “The same goes for many of the other ladies around here.”

Those ladies, about 50 to be exact, are part of the Women’s Sertoma Club of Venice, the organization that sponsors and organizes the annual event in downtown Venice.

Although only half are involved in organizing Sun Fiesta, all work tirelessly year-round to empower women and families in the community through a series of scholarships for high school students and adults who want to further their education.

Powering that engine is a weekend of live music, arts and crafts, races and other events. The festival’s most popular events, including the bed races (where teams of four race to carry a mattress with another team member sitting “in bed”) were canceled thanks to inclement weather on Saturday. The Miss Sun Fiesta Pageant was held at Epihany Cathedral. Sunday’s festivities continued without a hitch.

“It’s exhausting, and we’re all at times a bit cranky, but Mary’s got this saying,” said Laura Bennawy, 71, former president of the Sertoma Club. “She says everything will be just fine, and it is.”

“Back then, the nights were a lot later and we were a lot younger,” said Moyer, who held some of the first meetings to take over the festival in her living room about 25 years ago.

The hard work, however, seems to be paying off. Every year the club manages to feed handfuls of families on Thanksgiving, hand out presents on Christmas and help send scores of women, like 17-year-old Faith Kern, to college.

Kern, a senior at Pine View School, was named Miss Sun Fiesta and won a $2,000 scholarship. If all goes according to plan, Kern hopes to study at the University of Florida with the eventual goal of being an orthodontist, like her mother.

For Kern, the festival is a sign that, despite so many snowbirds and new people in Venice, it’s “still an old-fashioned town that keeps its traditions alive. That’s very important; it brings people together.”

Jen Moak, 76, and Ken Goeway, 82, who spent Sunday afternoon dancing to Venice’s Sophisticated Swing Big Band, it was a chance to feel at home after migrating permanently from Delmar, New York, in July.

“Nope, we’re not snowbirds anymore,” Moak said, tapping her foot to the music. “I’m glad, glad, too that we were dancing when you came along.”